Wherever you stand on one side or the other of a hot-button issue, how do you feel about how a Christian ought to present their side to the world? Should we sit back and ignore the other side of an issue, or should we be “in your face” about it?

I believe the tone we convey is the more poignant message than the message we spell out in words. The best-intended thoughts are wasted if our tone conveys something opposite from our intentions.

What do you think about the following examples? This isn’t a debate about the issues, so it doesn’t matter which “side” you are on. Instead, I want to know what tone you hear in the message just as it is presented. What does it say to the other side, good or bad? 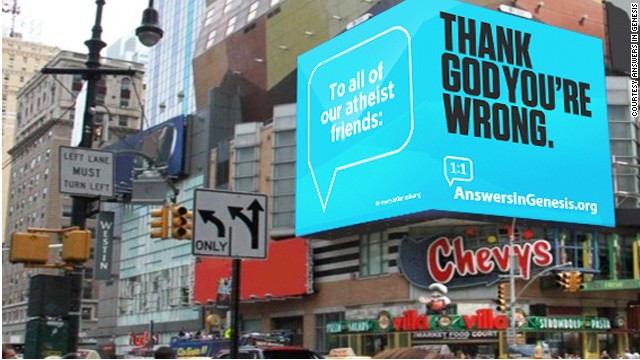 A billboard in Times Square from Answers in Genesis, featured on CNN.

Featured in a blog post commentary from a pastor named Jim Greime (I am not sure if he took the photo or got it from somewhere else).

A protester photo attributed to members of Westboro Baptist Church, a controversial group.

What message does each of these signs say to you? If you feel negative about any of them, what is it about it that gives you that feeling?

I’ll weigh in after you’ve had a chance to think and comment.