When we bought our house, we inherited some of the worst carpet! I think buyers had passed over the house for several years mostly because the house was so badly in need of a face-lift. Since we had several months before we had to move for my husband’s job change, we had some time to go up north on weekends and work on updates.

On one weekend, we decided to tackle the pea soup colored carpet. It was in all four bedrooms. This room had both paneling and the pea soup carpet. Eww. Someday, I’ll do something about that paneling, but for now, it’s not a bad room for a teenaged boy. By the way, yes, that’s paneling in the ceiling too! 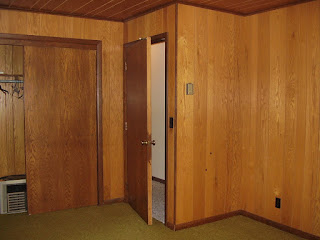 This bedroom had peeling wallpaper and the awful carpet. I didn’t take the world’s best before pictures since I took them on our tour with the realtor before we closed on the deal. You can see a little bit of the carpet on this picture. 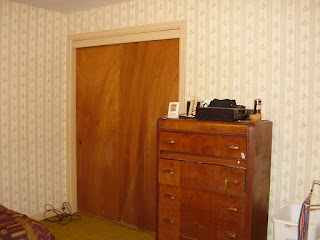 There is no nice way of describing this carpet. I couldn’t get it to the trash fast enough! But in the process of getting rid of it, I discovered it held a treasure. 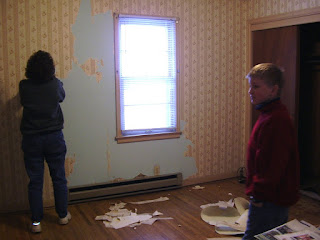 My friend Brenda came to help with the destruction renovation one weekend and I was working in another room when I heard a scream from the room she was in. She had pried up a little corner of the carpet and found the hardwood floor beneath. (Above, she is helping my son rip the old wallpaper off.) I thought she had found a mouse or a giant spider, but I was thrilled to see the wood! We found this hard wood in another room as well, and I found out that it’s under half of my living room (future project there). I was so excited!


I sanded and varnished the wood floor and it’s beautiful. When we had the carpet installer put new Berber in the two rooms that didn’t have hardwood underneath, I had him cut away a little patch by the front door to help create more of an entry way feel. 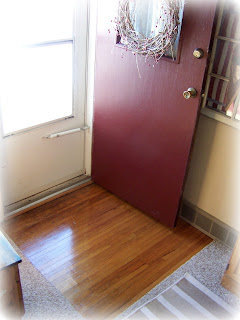 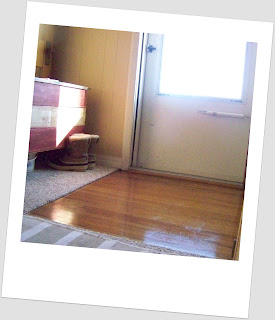 Eventually, when the rest of the carpet in that area wears out, I’ll be sanding some more floors. In the meantime, I gave it some good coats of varnish and enjoyed the treasure that had been hidden beneath carpet for 30-40 years.

Some of the best trash to treasure decorating changes are already right there under our noses!