When we moved into our house, we inherited the drapes. I wanted to get rid of them, but the living and dining area have three big picture windows and when I did the math, it was impossible to afford to replace them with something more attractive. So after living with them for a while, I finally came up with a solution that cost me just $30 for supplies for the three huge windows.

I had already painted the paneling and while that was an improvement, the drapes were still just blah and misfitting. 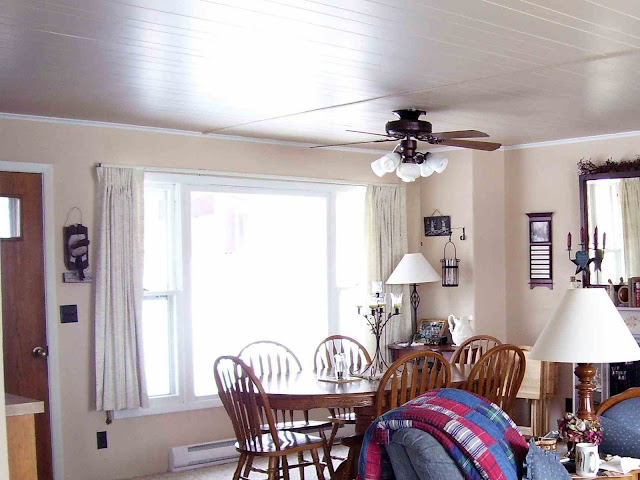 See how they were too short?

I saw a demonstration of making Roman shades on HGTV and decided I could do that! I did make a few modifications that kept the cost down. First, I used small metal washers instead of the white plastic rings. Metal washers were cheap! Then I discovered that in the boating section of our Menards store, the rolls of string were much cheaper than buying the same stuff by the yard at the fabric store. Finally, I needed a cleat for each shade to tie up the string when the blinds were open. Back to the boat department I went. What sold for $3 at the fabric store was just .79 cents at the home improvement store.

I scrounged wood for the header and dowels from our scrap bins which kept the cost down as well.

Now, the big challenge was where to find enough fabric for Roman shades. That’s the trash to treasure part of my makeover! I used the old drapes and cut them up. I cut off the pleats at the top to leave a large square panel for each drape. Here’s a close-up of how that fabric looks as a roman shade. 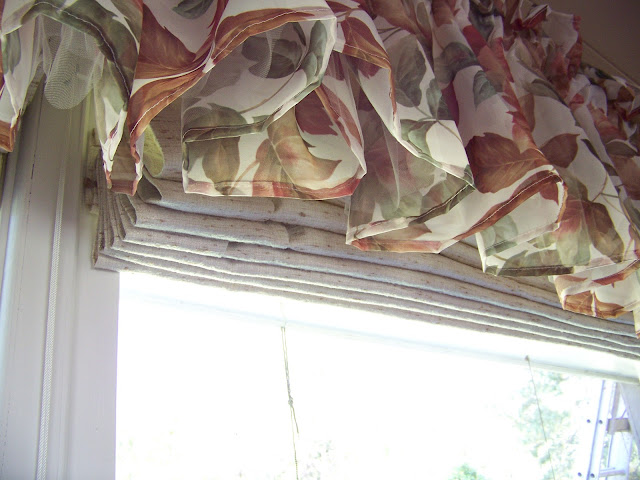 I also added a valance topper which I picked up at the Goodwill. It was a big flat panel of fabric that I cut into thirds to sew into the valance. Then, I purchased the side panels on a big clearance at Wal-Mart. They were connected in the middle, but I cut them in half to put a panel on each side of the window. For drapery rods, my husband fashioned something out of small PVC pipes. 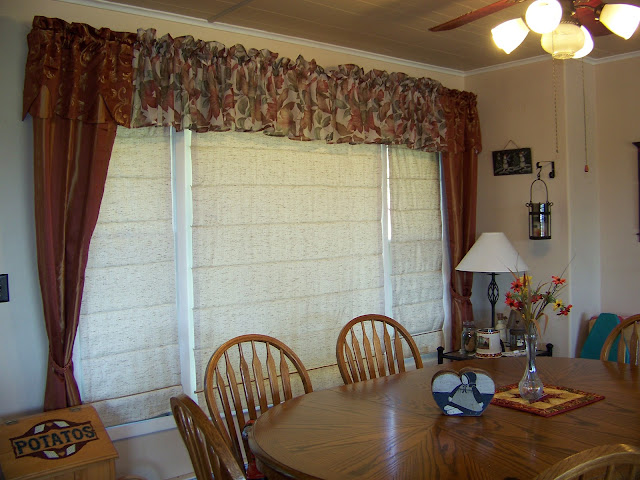 Not too bad for a VERY cheap transformation. If you look close enough, yes, I do have some seams in the middle of my shades from the seams in the drapery fabric. I was okay with this, mostly because if I can’t do it cheap, I can’t afford to do it at all. Weigh it out with me: seams or drapes, seams or something much much better even if it isn’t perfect.

Want to make your own Roman Shades? Here’s another demonstration of the how-to on Denver Fabrics if the HGTV link above wasn’t quite what you are looking for. It takes some sewing and some engineering to get it all right, but if I can do it, so can you!