I took a break from the blog yesterday, so today, you get a 2 for 1 on The Pinterest Project.

I saw a post on Pinterest about putting Ivory soap in the microwave. Within a minute, it is supposed to get big and fluffy. A photo and instructions on a website called Our Best Bites promised that it would look like this: 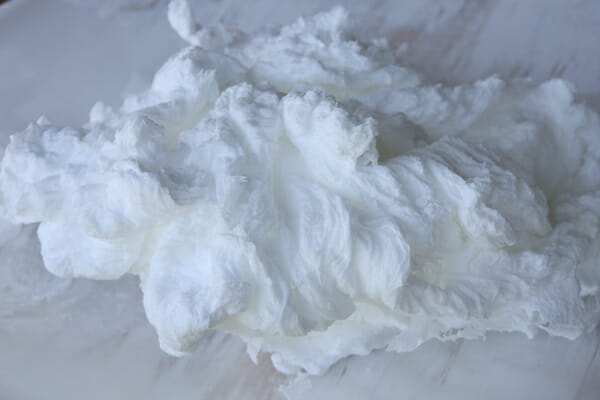 On that site, they used it to shape fun bath soaps for kids. I needed a kid’s illustration for a chapel service where I was speaking, and seeing a bar of soap change into a big fluffy pile was just what I needed. I hauled a microwave into the chapel for the demonstration. Of course, I tried it out first without an audience. And it worked!

After about a minute, I ended up with a pile of fluffy white stuff. I used only half a bar.

At first, it can be shaped a little, but mostly it’s crumbly. In the instructions above, they crumbled it up and added water to press it into cookie cutters and make shapes. Right now, I have a ziploc baggie full of soap fluff, and I’ll have to decide what to do with it someday.

The great news is: The soap experiment works. Oh, and in case you wanted to know what my object lesson was…I talked about how when we know Jesus, we should be completely transformed. We are still the same people in many ways, yet we should be changed in our attitudes and actions.

So, if you try this at home, be sure you use Ivory. As far as I know, it’s the only soap this works on.

There are posts all over Pinterest showing how to make a glowing bottle of liquid with Mountain Dew, baking soda, and hydrogen peroxide. Here is one of the photos that promises results.

I wanted to try this out to see if it really works. I didn’t have Mountain Dew on hand though, so instead of making it, I looked to see if someone else tried it out. I found a detailed post on Yahoo Voices from blogger Heather Adams.

Check out the experiment Heather conducted with her son.  In their “does it work?” experiment, they had all three ingredients.

They followed the directions carefully, but couldn’t duplicate the glowing bottle. Heather did say she saw some comments online from people with results like hers, but were also a few people who claimed it sort of worked. I’m guessing those were hoaxes too, as there are many posts contradicting the possibility. Here is another post that mentions that it has been disproved on Snopes.com.

Since I’m leery of home chemical experiments, this sort of thing worries me. Someone could get hurt. This is a definite Pinterest fail. Not enough info is given for safety sake and no evidence that it works.

So, I sort of cheated on this one since I didn’t conduct the experiment myself. But, greater lesson here is that the Proverbs 31 woman is careful about not believing everything she sees and hears. It’s easy to get caught up in rumors and handy little household tips that aren’t really true. Before passing along a story, health tip, or experiment, always check it out. There are a lot of falsehoods out there that were created by sick and twisted people wanting to see if their lie goes viral.