Recently, I spent a week in California and it was a refreshing break from the Wisconsin Narnia. For the non-Narnia fans that’s never-ending winter. Now, lest the rest of you who live in tundra climates feel a twinge of envy, I must admit that I was near San Francisco and the February temps there were in the 50’s and 60’s. Not exactly basking in the sun, but certainly a reminder of Spring! And I’ll also admit that they’re in their rainy season, so I didn’t see the sun until the fourth day of my trip. But the rain made it worth the wait! The last time I was in California, it was wildfire season. This time, everything was lush 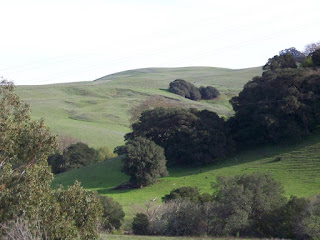 One afternoon, as we traveled from sightseeing in San Francisco back to my sister’s home, I had a moment of déjà vu. As I took in the beauty of the rolling green hills and valleys, I recalled a previous trek on this same highway several years earlier. At that time, anxiety and sadness mingled in my mind and circled like the smoke rising from the burning hills. I was nervous about my upcoming flight home and sad about leaving my sister behind, so far from Wisconsin. I didn’t speak to the others in the car about my thoughts. As the others chattered, I noticed black, tan, and brown cattle dotting many of the hills, and despite nearby charred spots from extinguished fires, these cattle grazed in calm, unharmed.

I remembered a line from scripture about God owning the cattle on a thousand hills (Psalm 50:10). Peace washed over me and I knew that everything was in His hands–my flight, my sister’s future, my unspoken worries. I pulled out my camera and snapped a picture so I could remember how God spoke to my heart through those scattered herds. Just a few verses after the one about cattle, Psalm 50:15 says, “Trust me in your times of trouble, and I will rescue you, and you will give me glory.”

Now, in the moments of remembering, I found renewed hope in seeing those cattle once again. And once again, I pulled out my camera.