Skip to content
Stations of the Cross: An Artistic Portrayal of the Easter Story
I’d like to introduce you to a documentary that follows 15 professional Australian artists as they prepare their works for an Easter art exhibit. I was asked by the producer and director of “Stations of the Cross” to review the film and it’s an interesting film.

The film is a documentary narrated by the exhibition curator, Nadia Turner. Turner describes the stations, which are based on Catholic tradition, and she shows the behind-the-scenes work that it takes to put together such an event. Footage shows interviews with each artist as he or she creates the piece that will be on display. Art pieces are formed from a variety of media including paint, sculpture, 3D, and more. The fifteen stations depicted begin with Jesus’ conviction and follow through to the resurrection.

I enjoyed this film and the 45-minute length makes is perfect for educational purposes. I also enjoyed the artsy background music. The reactions from the artists to their commission of creating a depiction of a station varied. One artist describes the depiction as something that “could have happened,” referring to Jesus’ death and resurrection in a way that it could be a disputable historical event. However, another artists saw this as a worship experience and she danced and praised God as she painted. 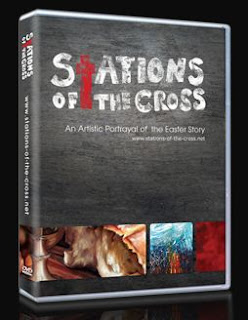 I also found the actual depictions interesting. Some of them might be construed as sacrilegious, but they represented how the artist felt. There was an interesting contrast in the piece representing Jesus on the cross. The artist included a quote about a Happy Meal in the painting because he equates McDonalds with Satan.

One powerful aspect of the film is that it shows how some artists were moved by the process of studying the scripture verses describing their station. But one drawback to the film content is that the art show diminishes the depth of meaning in the story of the cross by minimizing the spiritual impact of Jesus’ death. This has little to do with the film and more to do with the particular artists that the curator selected. Those who are not Bible believers did not depict their stations with the same depth as those who do believe in the truth of the Easter story.

I think there is a market for this film in the US. Currently, the film is available in PAL format (which plays on a computer just fine) however, if there is enough demand in the US for a standard DVD version, the producer says it might become available in NTSC version.

I’d like to thank Matthew McNeil for sending me a complimentary copy of the film for review. I had the opportunity to interview him via e-mail regarding the film. I hope you enjoy the following Q & A.

*   *   *
Michelle:  What sparked your interest in making this film? Have you been to the exhibit before?

Matthew: I really like the idea that through art, people who would otherwise not spend time thinking deeply about the Easter story are thrown into contemplating just what it means for them today.
I am friends with the curator so I had a natural connection to the exhibition. This was actually my first year going along as I was briefly out of the country the year before, and living abroad before that.
Michelle: What your intent for this film? Is it purely for entertainment and education, or are you hoping that it has a spiritual impact on people?

Matthew: Before I set out to make this film I realized that it could be digested on a number of levels. The most obvious is perhaps on the visual art level, where it’s fast paced, work after work, artist and studio – it’s interesting and a little bit fun as Nadia attempt’s to organize the Exhibition. The actual Easter story is gently told to the attentive viewer, where as to the unassuming perhaps it’s a little subversive – not that anything is hidden, it’s more a recognition of what Jesus often said, ‘for those who have ears to hear, let them hear’. So to answer your question, yes I do hope that it will have a spiritual impact on people, but I am realistic that many people will totally miss it (on a conscious level anyway).

Michelle:  How did filming Stations of the Cross affect you personally? Were you moved by the artists or their portrayals in any way?

Matthew: I am a New Zealander living in Sydney, which is an Australian city not really recognized for the arts and culture, so I was really encouraged to discover so much art going on here. So making this film changed my perception of this city for a start. 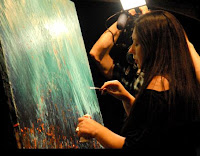 Logistically it was a complicated project, a hundred emails, a hundred phone calls and in the end I was disappointed not to be able to film David Wiggs – but fortunately Nadia was able to help out on his Station. I think all the artists were really interesting and it would be hard to say which one inspired me the most – It may have been complicated in the making but I am really happy with the final outcome.