Yesterday, I told you about Davis Bunn’s latest book, Unlimited. Today, I would like to tell you more about the author, and about the upcoming movie with the same title. 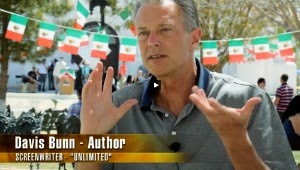 Davis Bunn is a four-time Christy Award-winning, best-selling author now serving as writer-in-residence at Regent’s Park College, Oxford University in the United Kingdom. Defined by readers and reviewers as a “wise teacher,” “gentleman adventurer,” “consummate writer,” and “Renaissance man,” his work in business took him to over 40 countries around the world, and his books have sold more than seven million copies in sixteen languages.
Unlimited is Davis’s first screenplay to be released as a major motion picture. The book, Unlimited, is a novelization of the screenplay.
Q & A with Davis Bunn
The storyline in Unlimitedis inspired by true events. What actual events inspired the story?
Harold Finch was formerly the founder and CEO of the first management-leadership consulting groups in the US. In the mid-seventies he sold the company to H&R Block for over a hundred million dollars—back when a hundred million actually meant something. Answering God’s call, he has spent the past three decades traveling the world, teaching his concepts for free and helping underprivileged children learn that they do indeed have both a purpose in God’s eyes, and the potential to succeed. His experiences form the basis for this story.
What ignited your idea for the characters to create a device that would convert raw wasted energy into useable power?
I actually wrote the screenplay for the film before writing the novel. This happens occasionally—Godfather and Love Story were both conceived in this order. While working on the film script, the producer and Harold and I were discussing what might work as a basis for the story’s suspense element. We were looking for something that had the means of revealing this ‘unlimited’ potential in people. I don’t actually remember who first came up with the idea of wasted energy, but soon as it was said, we all jumped on it.
Simon Orwell, the protagonist in Unlimited, is a brilliant, cynical electrical engineering student who finds danger irresistible. Did you model his character traits after yourself or anyone you know?
Alas, we all know a Simon. These days, this type of person is all too common. An individual with huge potential, who allows himself or herself to become distracted by the multitude of temptations that basically define modern life. And yes, I do know several such people. Some turn this into hugely productive directions, thank goodness. Usually to do so requires divine help, a clarification of focus, and strength they must reach out and ask to receive.
Many of the characters in the story are orphans. What parallels do you see between the orphans in the story and real-life spiritual orphans?
A beautiful question. While researching the core components of this story, orphanage leaders repeatedly stressed the need to teach orphans to believe in themselves and their natural abilities. Too often they see themselves as lost, without purpose, without a role to play, without chances, without love. What made this story work, I think, is how Simon Orwell shares these same feelings about himself. And how he comes to realize God is the only one to fill this need.
The title, Unlimited, has multiple layers of meaning. What does that title mean to you?
Unlimited was the title brought to me by the film’s producers. When I first began working on this story, it was just that, a title. But as I grew to know Harold, and heard him teach, and read his lesson plan, and then actually applied what he has come to call his ‘Dynamic Life Retreat’ (see Harold full teachings on his website, HaroldFinch.com) I have come to agree with them in their choice. Bringing God into the equation of life’s direction, success, and reaching full potential does reveal the true meaning of Unlimited.
Movie Trailer