Skip to content
The Tale of An Ugly Kitchen
When I moved into my house, I inherited a pretty ugly lovely kitchen. There were mismatched counter tops on both sides and the older part was stained and warped.It was really blah. 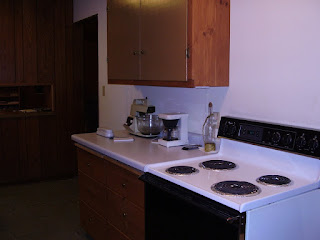 That was easy enough to fix, so I ordered new counter tops and my prince husband installed them for me. I took the doors off the ugly mismatched cabinet and made it my cooking area. 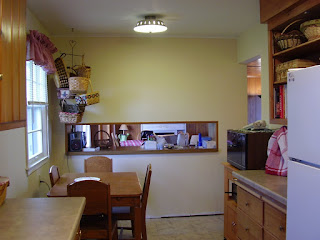 But the room wasn’t finished yet. There was this other counter top that was part of a built in china cabinet /peek-through to the dining room. Replacing that counter top was nearly impossible without a heap of trouble. It was this ugly… 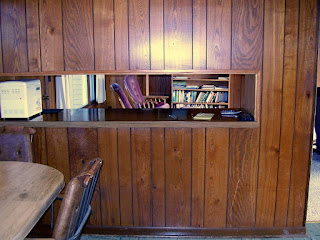 …before I plastered and painted the wall. And it was still ugly with the fake wood grain laminate counter top. What was I to do? 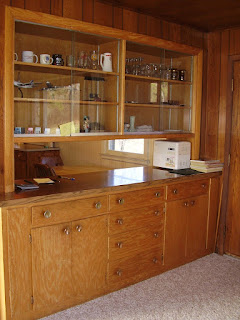 Here is another view of the problem.
I decided to look around on the internet to see if others had painted laminate counter tops. And alas.  They had. There were way too many opinions of how to do it though, so I decided to be brave and try it my own way. First, I scratched it all up really good with some sandpaper. Then, I primed it with a primer made for shiny surfaces. I like BIN primer by Zinsser or Bulls-eye by Zinsser, but there are others like Kilz.
That dried really fast. Then I used some regular satin finish latex pain over the top. I used beige to match my walls (See the paneling surrounding the built in hutch? Well, it’s beige now.) After this base coat, the fun began. 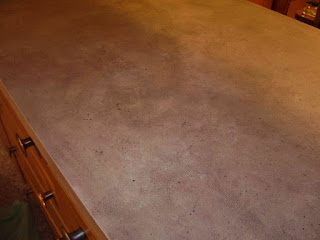 I scrounged through my craft paints and supplies and worked to match the faux finish to the other counter tops that I had purchased. So I sponged (sea sponge) and toothbrush splattered and dabbed with a dry brush until the surface looked right. I used some brown, some black, some white, and some tan. Then, I coated it with several (at least 4) layers of water based polyurethane letting it dry really good in between each layer.
It isn’t a surface that I use for cooking, just for serving and collecting clutter, so it has held up perfectly for at least 2 years now. If I had done this on a high-use area, I’d coat it even more and make sure that I never cut on the surface.
With this change complete, I lived happily ever after…or at least until the next thing that needed remodeling. Here is a happy ever after picture. 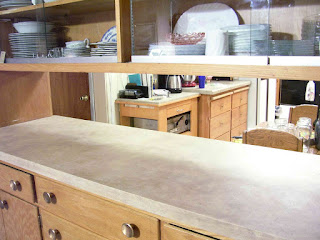 Next time, I’ll continue the story and tell you what I did about that awful built-in hutch! It was SO 70’s!
I linked up this week to:
Michelle