Skip to content
What’s On Your List?
Have you ever misplaced your shopping list? I have. Many times. I’ll dig in the bottom of my purse, run back to the car to look under the seat, panic, and turn every pocket on my clothing inside out finally resigning myself to rely on memory. However, when I get home I’ll have to start another list for the things I forgot.
At this time of year, it seems I’m even more infatuated with lists. Christmas is coming, so I’ve started my gift-shopping list. Sometimes, I’ll make a day after Thanksgiving sale list that might help in shortening the gifts-yet-to-buy list. That is, if I can snag some doorbusters in the sea of elbows and shopping carts without a black eye or a broken toe.
The list of lists goes on. I’ll make my Christmas card list and a holiday to-do list, and eventually a thank-you card list. In time, there are little papers everywhere. On my desk, on the refrigerator, between the cushions of the sofa—enough lists to make a person need to write a list of places to look for the lists. 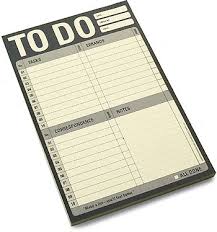 List-making can become an obsession. I confess that sometimes I complete a task that isn’t on my list, then I write in on and cross it off just for the satisfaction of having completed something on the list.
A recent e-mail from a friend gave me another perspective on the value of lists. She mentioned a book she had read in which the characters made a list of twenty things they would like to do, a checklist of things to learn and explore. They put their lists in a scrapbook binder. It reminded me of the movie “The Bucket List” where Carter makes a list of things he wants to do before he kicks the bucket. It also reminded me of the movie “Up!” where Ellie makes an adventure scrapbook of all the places she would like to go. Later as a widower, her husband Carl completes “My Adventure Book” for Ellie by finishing her list.
In the same e-mail I mentioned, my friend sent me a list of some of the things she would like to do, with no deadline, just things she’d like to achieve in this lifetime. Some are things that she could do today, and some are things that will take some strategic planning to make happen. This kind of list sounded so much more inspiring to me than grocery lists or to-do lists. It takes list making beyond the mundane into the realm of imagination, creativity, and life-long goals. I like that. And I like a list that isn’t a throw-away paper.
I love to dream and imagine what I might do, so I was itching to make my own list. But I wondered how I could reconcile my desire to make lists and dream big dreams with God’s purpose for my life. Was there some way my personal dreams could intersect with God’s purpose for me? Or would I have to toss out recreation or hobbies in favor of devotion to Christ?
As I did my personal Bible study the morning after I received the e-mail, a study question asked me to write down my primary purpose in life based on Philippians 3:7-11. In this passage, Paul talks about everything that he once thought significant being considered rubbish compared to the value of knowing Christ and being one with him. As I considered the passage, I realized that it isn’t that goals such as learning to sew or visiting the ocean are nonsense, nor that lists ought to be discarded. Instead, I think it means that in the greater scope of things, my relationship with Jesus Christ matters more than any of those other things. It means that the number one item on my list ought to be living a life that pleases God and brings him glory. It means that I need to base my choices on that goal and seek God for wisdom in my decision-making. And it means that my hobbies, aspirations, and dreams are fine, so long as they don’t get in the way of that primary purpose.

Dream your dreams. Make your lists. But remember to put your relationship with Jesus at the top of your list. It’s the only item on the list that matters forever.

This article also appeared in my “Habits for Quality Living” column in Wisconsin Christian News.

How to Cultivate the Art of Boredom
Get Beyond the Rut | Jerry Dugan
Knowing Your Why Directs Decisions and Goals
Gratitude, Celebration, and 3 Tips to Survive the Holidays

This website uses cookies to improve your experience while you navigate through the website. Out of these, the cookies that are categorized as necessary are stored on your browser as they are essential for the working of basic functionalities of the website. We also use third-party cookies that help us analyze and understand how you use this website. These cookies will be stored in your browser only with your consent. You also have the option to opt-out of these cookies. But opting out of some of these cookies may affect your browsing experience.
Necessary Always Enabled
Necessary cookies are absolutely essential for the website to function properly. These cookies ensure basic functionalities and security features of the website, anonymously.
Functional
Functional cookies help to perform certain functionalities like sharing the content of the website on social media platforms, collect feedbacks, and other third-party features.
Performance
Performance cookies are used to understand and analyze the key performance indexes of the website which helps in delivering a better user experience for the visitors.
Analytics
Analytical cookies are used to understand how visitors interact with the website. These cookies help provide information on metrics the number of visitors, bounce rate, traffic source, etc.
Advertisement
Advertisement cookies are used to provide visitors with relevant ads and marketing campaigns. These cookies track visitors across websites and collect information to provide customized ads.
Others
Other uncategorized cookies are those that are being analyzed and have not been classified into a category as yet.
SAVE & ACCEPT
%d bloggers like this: