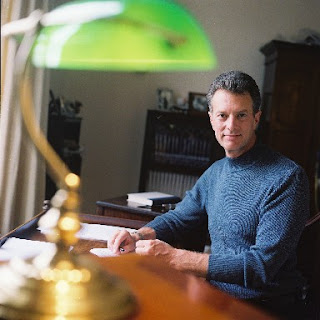 Davis Bunn is an award-winning novelist whose audience spans reading genres from high drama and action thrillers to heartwarming relationship stories, in both contemporary and historical settings. He and his wife, Isabella, make their home in Florida for some of each year, and spend the rest near Oxford, England, where they each teach and write. Visit Davis at www.davisbunn.com

Q & A with Davis Bunn
Though you have published two dozen novels, Lion of Babylon seems to be a seminal work for you. Tell us where the idea began and how all the complexities of the story came together.
While crafting Lion of Babylon, I was repeatedly struck by how I had spent much of my life in preparation for this joyful task. During my earlier career in the business world, I worked four years for a company in which I was the only non-Muslim in the company’s entire management. I studied with an imam for a while to better understand their history, culture, and religious beliefs.
That job caused me to travel often to Africa, Asia, and almost every country in the Middle East, revealing the very distinct divisions represented by the word Muslim, which to most Westerners conjures up only images of terrorists and violence.
So Lion of Babylon has been at work in my heart and head for a while. Along with visits to the region, I have friends and acquaintances both in the U.S. and other countries who have been invaluable resources for “insider information” on government policies, national security, religious issues, cultural norms, the setting, and so on—all the parts and pieces that go into creating authentic characters and plot.
The original title of this novel was The Green Zone. Why the change to Lion of Babylon? What is the historical significance of the title?
Just as I was completing the first draft of my novel, the film Green Zone was released. Nothing could have been further from what I hoped to achieve in my story. Everyone at Bethany House Publishers who saw the film agreed. There was no question. The name had to be altered.
Lion of Babylon is an expression from the very early days of human history, around the time that Abraham was instructed by God to leave the idolatrous land of Ur. The title Lion of Babylon comes from that same period, derived from the epic poem Gilgamesh. It refers to a hero of the people, one who can be trusted to see them through perilous times. What better way to describe the gift that Jesus holds.
Have you personally witnessed or experienced reconciliation between Muslims and Christians? Or is the reconciliation that occurs in Lion of Babylon wishful thinking?
This sort of reconciliation goes on every day. And to witness this, especially by someone who knows first-hand the tragic conflict threatening to overwhelm these countries, is nothing short of miraculous. And yet it happens, over and over and over. And each time it occurs, it is living testimony to the power of faith in Jesus.
You have a passion for faith-based peace initiatives. How did that passion play into the writing of Lion of Babylon?
The role I play is very small, compared to the amazing and heroic work done by others. But it has remained something very dear to me, and perhaps someday I might take on a greater responsibility. The entire effort, which is taking place in every country in the Middle East and North Africa, comes down to the simple act of bringing the presence of Jesus into the heart of these discussions.
Did you have other motives for writing a book of this nature?
I can still remember the first time I saw Lawrence of Arabia, and all the mysterious beauty of this region came to life. Ever since I began writing, I have sought to reveal some small fragment of the wonder and astonishing richness I have discovered through my own travels. This certainly played a role in shaping this story.
Tell us about your process of writing Lion of Babylon

?
This is the first time I have based a story upon my experiences of working and living in the Middle East. I wrote the outline over a six month period, coming back

to it time and again between other projects.
My desire was to have half the story told from the point of view of an Arab Christian. I asked myself:

In order for such issues to NOT get in the way of the overall story, I needed to grow utterly comfortable with this man, his world, and his ‘skin’, during the outlining phase of the writing process.

Then I just sat on it for months, knowing I needed something more, but not sure what it was. Finally I showed it to my editors at Bethany House Publishers. It was only when I received their feedback that I felt the book begin to genuinely solidify.
In general, the crucial change between outline and first draft is the climax. I have never had my first vision of the climax actually become the book’s culmination. Lion of Babylon is no exception. As usual, what I envisioned as the climax actually became one of the crucial moments LEADING to the climax. I find I like this uncertainty, this unexpectedness. If I don’t know, the reader normally can’t anticipate.
Where do you write – an attic, a nook, or an office?
My writing life is focused upon solitude. Because of this, I like to have a broad open space before me. My desk faces a window, and the window looks out over sky. I had a dear friend once, another author, who said he couldn’t stand such a position; he would not ever get anything done. I feed off the sky.
You have been referred to as the ‘Gentleman Adventurer’, Davis. How did that description come to be?
I suppose it is because of my background and varied interests. Raised in North Carolina, my post-college years landed me in Europe, where I earned graduate degrees in finance and economics. My career in the business world took me to over forty countries on every continent, providing opportunities for hiking and skiing in the Alps or surfing off the coast of Africa.
Tell us about your faith journey.
I grew up in a southern family with unquestioned involvement in church as an important part of our lives. It wasn’t until I was 28, though, and running a business advisory group in Germany, that I met someone who opened the Scriptures up for me. I discovered that one could have more than simply a nodding acquaintance with Jesus. Two weeks later I began writing, and it has remained my passion and calling ever since.
Your writing also has been a journey. You wrote for nine years and produced seven manuscripts before the first one was accepted for publication. How were you able to retain your passion during that time?
I admit it was not easy, and I could have given up at many points along the way. But probably the most significant event was meeting someone who believed in me and my creative gifts. A lawyer, this friend offered to represent my work and find a publishing home for me. That occurred with the release of my first novel, The Presence, and I very wisely married her!
Isabella is an acclaimed attorney, doing work for the UN related to human rights and ethics, but she also is a beloved wife and partner with me on the writing. Her touch in some way appears in everything I write.
What is the take-away message you want readers to receive after reading your book?
Lion of Babylon is being called a thriller, and I do hope readers experience a ride they won’t forget. Beyond that, though, my desire is that readers will have a new understanding and appreciation of West versus East, of the highly complex issues related to the United States’ involvement in Iraq and Iran, and possibly a new way of thinking about solutions for peace in the Mideast.
I feel that we as believers need to glimpse a world beyond the dark headlines and the fearful strife. We need to gain a higher perspective. I would so very much like to have this story help readers rise up to a new vision of this region. One where Jesus reigns.
How can readers find you on the Internet?