Have you watched the news lately? I know, It’s depressing. But I can’t help it. I want to know what’s happening around me…and check the weather too. If it seems like the media is obsessed with bad news and other people’s heartache, it’s probably because we’re obsessed with watching it.

Here are a two headlines from this week that bother me. May I rant just a little?

The news about the Schwarzeneggers bothers me. I can’t imagine being a wife who defends her husband’s honor, only to find out years later that I was duped. How painful! But you know what bothers me even more? The double standard we hold in our society. When The Governator’s lie was discovered, reporters called this the end of his political career. They said the same when governor Mark Sanford of SC got caught his his infidelity and lies. But when the president of the United States committed adultery in the Oval Office, it didn’t end his political career.

So, why does this bother me? Because we don’t have a standard of morality or a clear definition of adultery. Since Gov. Arnold’s infidelity produced a child, and Sanford’s affair included his running off with a lover, people were outraged. But President Clinton’s affair made people squirm and hesitate to point fingers since it crossed into a moral gray area. It made people ask what constitutes adultery.Let’s make it clear. Any emotional or physical connection that leads to a physical or sexual attraction to a person other than one’s spouse is adultery. There are no degrees of adultery. Internet, porn, e-mails, one-on-one lunches, phone calls, texts, trysts at a hotel, kissing at the office…it’s all the same.Gov. Schwarzenegger is dead wrong. But if we’re going to try him in the media for his sexual sins, we’d better point fingers all the way around…in Washington, in our communities, in our churches, and at ourselves. Selective morality drives me crazy.

If you’ve watched the news this week, you’ve likely heard that end of the world is supposed to begin tomorrow. Now, if the rapture does happen and if I’m not around to post my letter of apology to recant this statement, consider my words eaten if I’m not here tomorrow.

Harold Camping has wasted plenty of time trying to figured out when the world will end. Camping sent a goodbye letter to his radio listeners this week and he’s certain this is it. He’s 89 years old and he’s about to find out he’s wrong. Again. He was wrong in 1994. 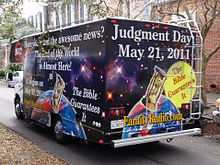 Some people have sold their homes and are living in RV’s waiting until tomorrow. They’ve taken last hurrah vacations and canceled appointments for next week. There is a very good reason for why the Bible doesn’t give us the day or the hour. We’d do foolish things. Instead, we are to live every day being ready, trusting in God and not in men.

So, why does this bother me? Because it makes Christians look like fools. It’s just another occasion for unbelievers to run far away from the wacky people who put their faith in crazy predictions.

What Can We Do?

When these topics come up in conversation, we have the opportunity to present truth. Talk about what the Bible says about morality. Talk about the gospel. Use current events as a means to initiate conversations that could leads towards deeper spiritual subjects. If it bothers you, it’s probably given someone else some questions that you might be able to answer.

This website uses cookies to improve your experience while you navigate through the website. Out of these, the cookies that are categorized as necessary are stored on your browser as they are essential for the working of basic functionalities of the website. We also use third-party cookies that help us analyze and understand how you use this website. These cookies will be stored in your browser only with your consent. You also have the option to opt-out of these cookies. But opting out of some of these cookies may affect your browsing experience.
Necessary Always Enabled
Necessary cookies are absolutely essential for the website to function properly. These cookies ensure basic functionalities and security features of the website, anonymously.
Functional
Functional cookies help to perform certain functionalities like sharing the content of the website on social media platforms, collect feedbacks, and other third-party features.
Performance
Performance cookies are used to understand and analyze the key performance indexes of the website which helps in delivering a better user experience for the visitors.
Analytics
Analytical cookies are used to understand how visitors interact with the website. These cookies help provide information on metrics the number of visitors, bounce rate, traffic source, etc.
Advertisement
Advertisement cookies are used to provide visitors with relevant ads and marketing campaigns. These cookies track visitors across websites and collect information to provide customized ads.
Others
Other uncategorized cookies are those that are being analyzed and have not been classified into a category as yet.
SAVE & ACCEPT
%d bloggers like this: