It’s Transformation Tuesday at T2T and just as promised, I have a fun project to share. A friend of mine asked if I’d recover a children’s rocker that had belonged to her father. Because of the sentimental value of the heirloom, she wanted to preserve it for her own boys.

It’s cute, but you can see why she wants to re-do it, right? 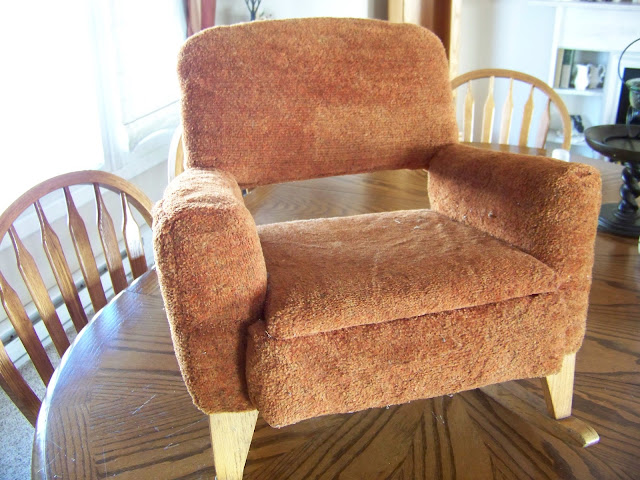 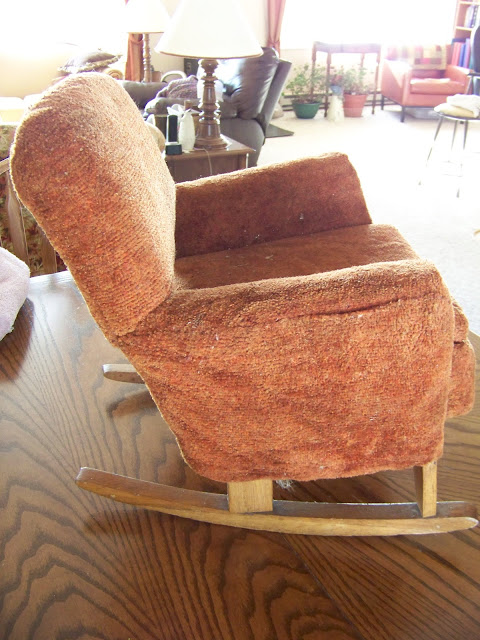 She selected the fabric. It’s 100% cotton by Waverly and the pattern is named Columbus Circle Spa. It has a brown background with circles of cream and bluish, grayish, green (can’t think of a better way to describe that color). 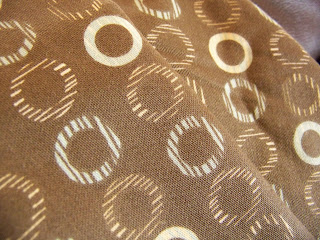 The photos just can’t do justice to the color, but it’s sweet. 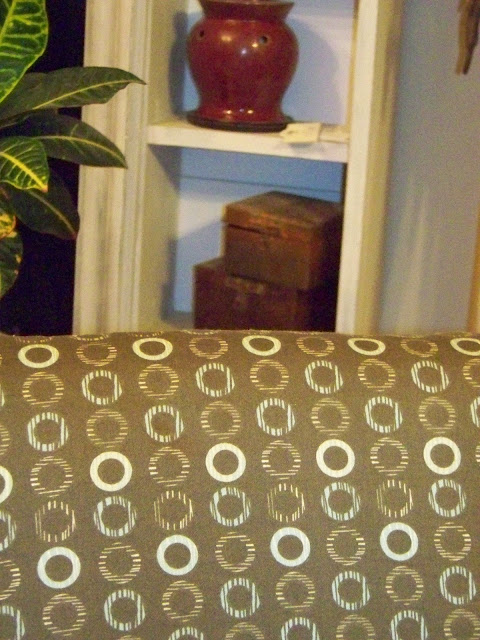 I started by deciding which pieces of the old fabric to remove and which to leave. Now, you can certainly strip all of the old fabric off, but sometimes, I find it gives a little more stability to leave it on. However, sometimes it gets just too thick for nailing over and you have to take it off. It’s mostly tacked with nails and staples. The seat lifted right off. 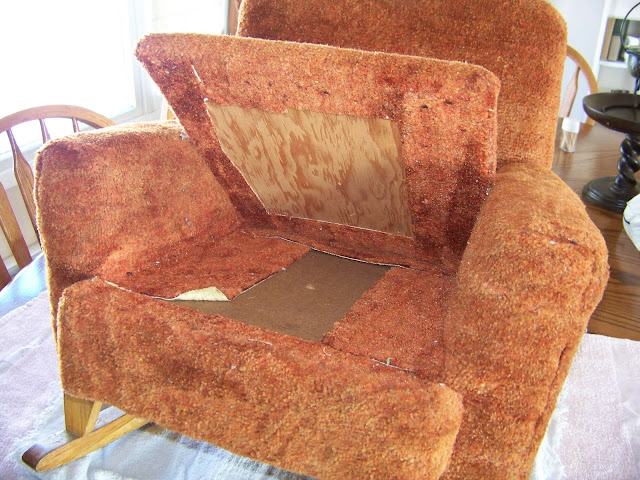 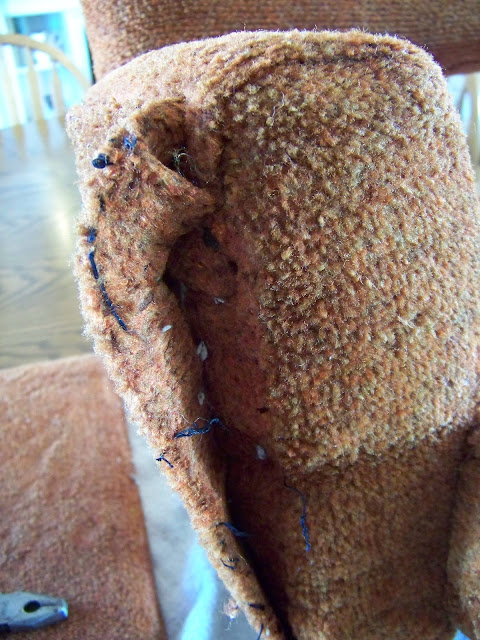 Some areas had been hand-stitched together, so I used a pointy scissors to remove the stitches. 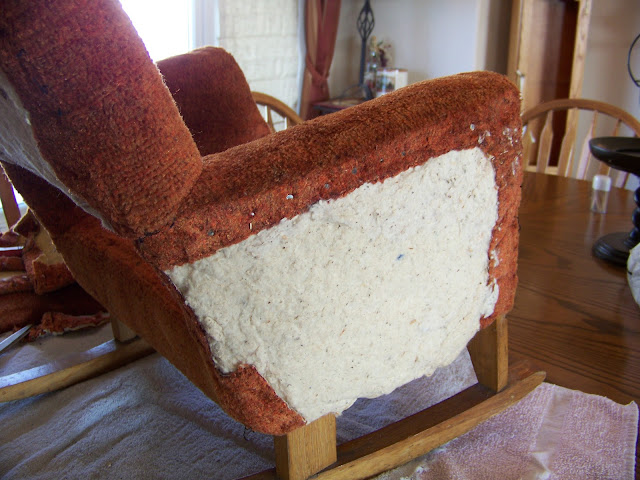 The sides were attached with upholstery nails/tacks.
If you’ve ever removed old upholstery, you know that it’s a dusty job. The backing of the old fabric begins to disintegrate, which puts off dust, plus it’s just dusty from years of use. Achoo! 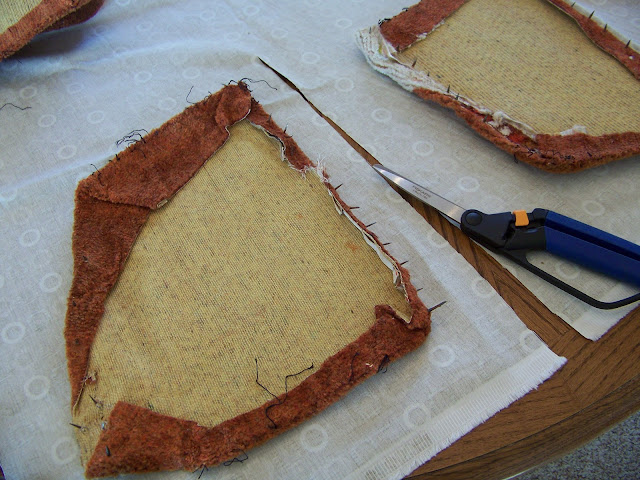 See the spiky nails? Watch out! I used the pieces that I removed to estimate the sizes I needed to cut for replacement pieces. 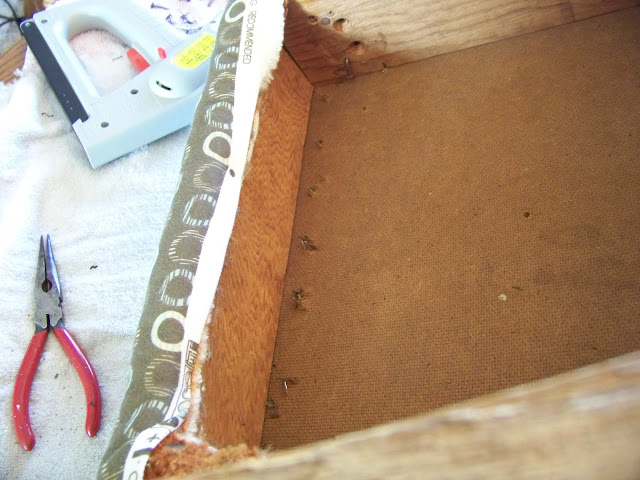 With any sort of recovery project, it’s all about figuring out where to put staples. I pulled fabric around to the bottom to fasten it. See those staples sticking through the seat from where I stapled on the top side? I know how little children like to crawl under furniture, so later I would be sure to cover the bottom so they couldn’t scratch their little heads. 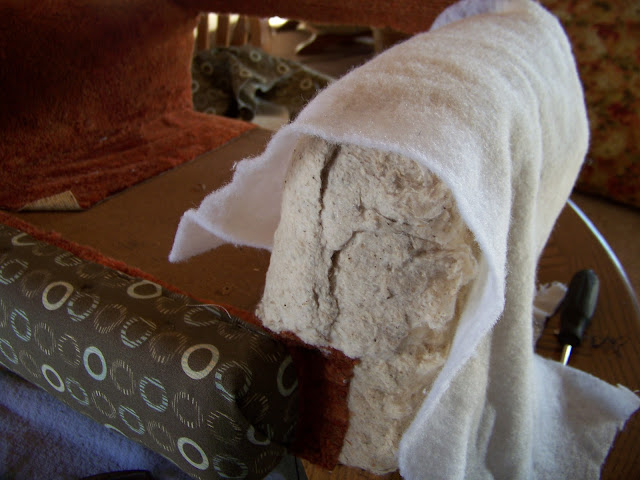 When you recover an old chair, you can keep the padding that’s there, but it’s nice to add a little more to smooth it all out, so I used up some chunks of batting left from quilting. I just laid them over the old stuff and when the stapling begins for the top fabric, the batting will smooth out. 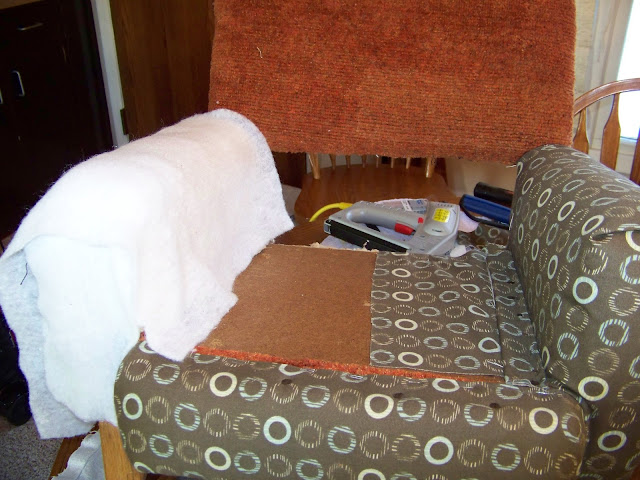 When I got going, I realized that the old wood was not receiving staples so well and so I modified my plan. In the original covering, the outer surface of the sides were separate little pieces tacked on. However, for greater stability and durability, I decided to sew my outer side pieces to the inner side pieces. Yeah, I know, that’s as clear as mud. Let’s just say I had to do some sewing and modifying.
Same with the back rest. Instead of using two pieces and lots of staples, I sewed what was basically like a pillow case for the back and then stapled it at the bottom of the backrest where you can’t see.
The seat was the easiest part! Staple, staple, staple. 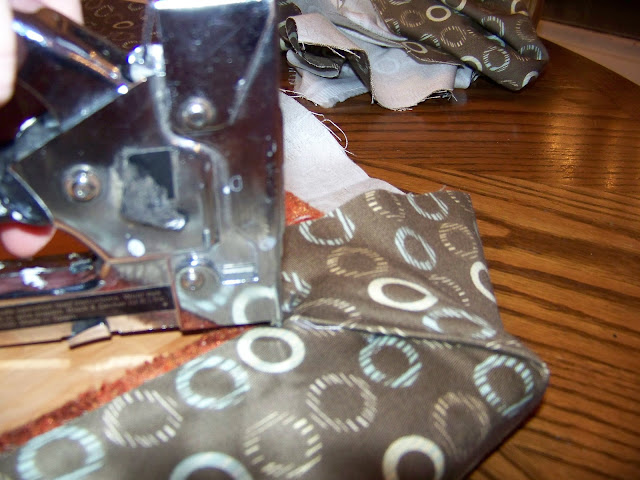 If you have padded dining chairs, they are SO easy to recover. You just remove the seat from the chair and cut a piece of fabric bigger than the seat on all 4 sides. Then you staple it on all for sides, mitering the corners like you were wrapping a birthday present. 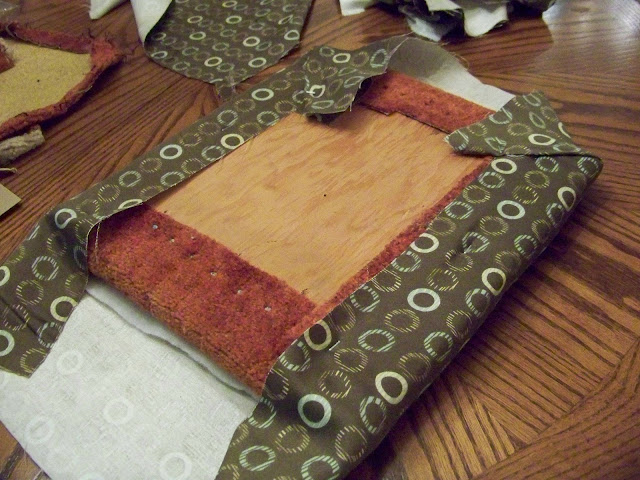 If you’ve never reupholstered anything, this rocking chair is a little complicated, but the seat part shows you how easy it is to recover a chair seat. Just be sure that the staples are not longer than the thickness of the plywood seat. Ouch!
I went around all four sides of the seat. Notice I left on the old fabric. Since the new stuff is a thinner decorator fabric, I was afraid the plywood would wear through the corners really fast. So I left it on for stability and added a layer of batting too before putting the new fabric over. 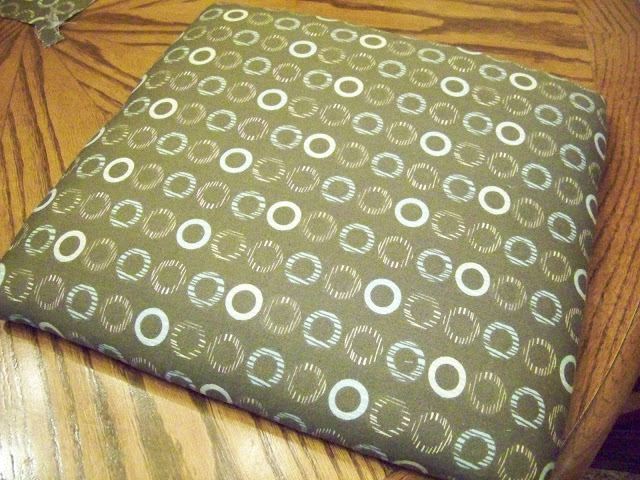 The seat was ready to put into place. It’s attached with a couple of short wood screws.
And now it’s time for the reveal… 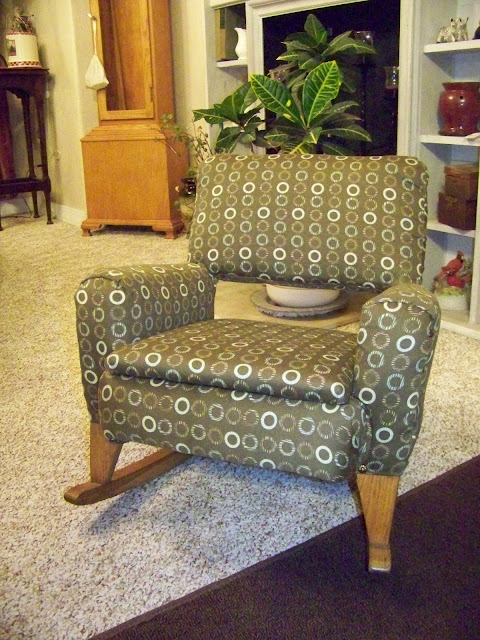 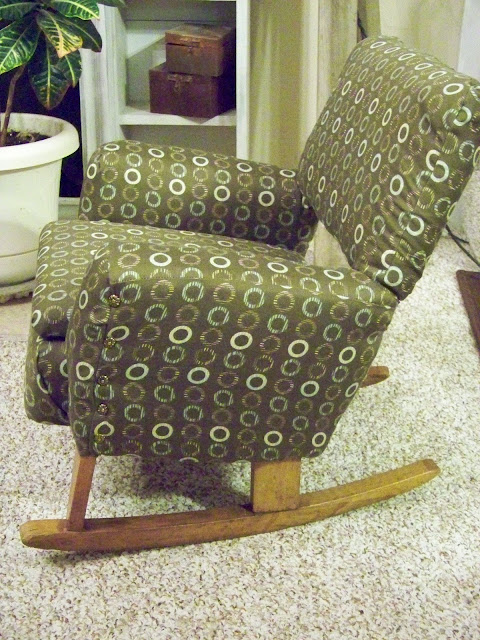 You’ll see that I used decorative upholstery tacks anywhere that I had to finish an edge that would show. On the underside, staples are fine, but decorative tacks are perfect for the outside.
You can see on the armrest and on the back where I have seams that I sewed. The rest is stapled and tacked. 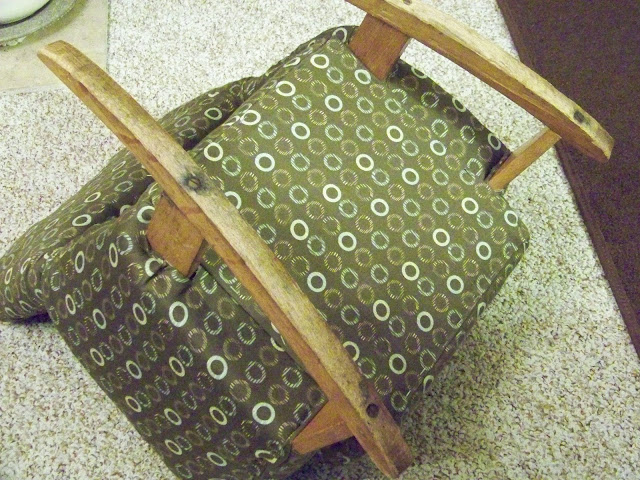 Just like I promised, I finished the bottom side too. The original was open. I cut four 1-inch wide strips of scrap cardboard (a cereal box works) that were the length of all four sides of the chair bottom. Then I cut a piece of fabric that was about an inch or two wider all the way around. By folding each side of the fabric over a strip of cardboard, it was easy to get a nice straight edge to staple that bottom piece in place. I could have done it without the cardboard, but this makes it neater. I didn’t worry about staples showing-it’s the bottom anyway.
Wondering about a few of the things I tried to explain? Check out the colored arrows below. 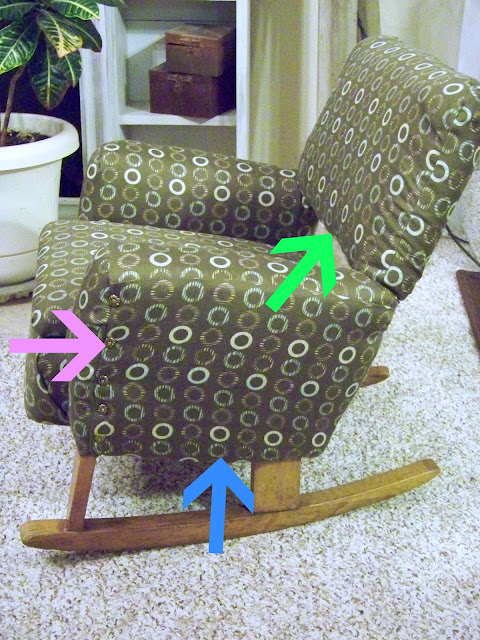 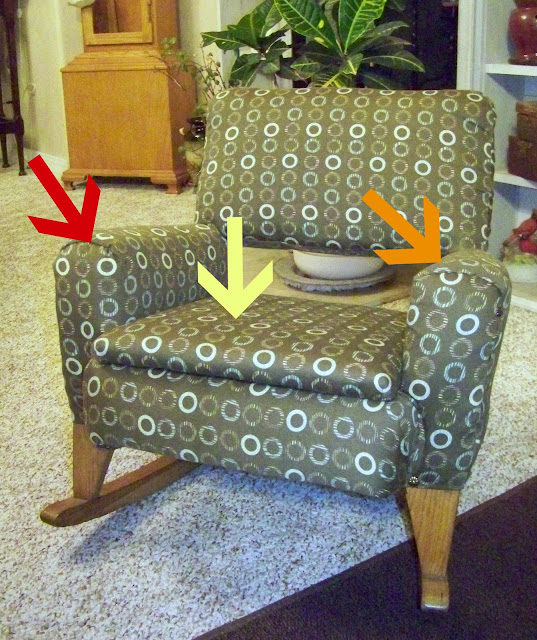 Someday, I’ll have to video tape a project like this, but it’s kind of hard to hold the camera and work at the same time. Are you ready to tackle a small upholstery project of your own?
Michelle